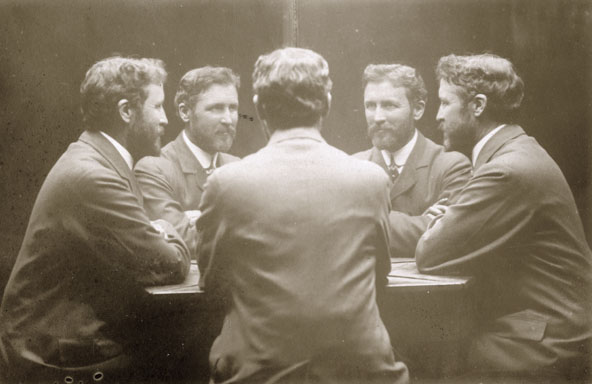 Registration is required. Scroll down for link at bottom of page.

Physician Robert Latou Dickinson (1861–1950) resists categorization. He was a long -time obstetrician and gynecologist; a research scientist invested in sexual health who influenced Alfred Kinsey and notions of sexuality; a birth control and reproductive sterilization advocate; an anatomist who authored an influential atlas of reproductive anatomy/ an artist who illustrated his own scientific texts; and a public health educator whose popular sculptures and models changed the way the public visualized the birth process. “Normalizing Sex Research and Education in America: Robert Latou Dickinson in Perspective” will explore different aspects of Dickinson’s long career, addressing his work in reproductive health and family planning, his time spent as a sex educator and artist at the New York Academy of Medicine, his Birth Series models created for the 1939 World’s Fair, and his depictions of human anatomy and concepts of normalization through his models Norma and Normman. Dickinson’s legacy is still with us today, and his personal papers and models remain some of the Center for the History of Medicine’s most-used collections. With the help of these four scholars, we hope to better understand the impact and legacy that Robert Latou Dickinson continues to exert on our current health science and clinical care community.

An exhibition also entitled Normalizing Sex Research and Education in America: Robert Latou Dickinson in Perspective will be on display for the event (L1 of the Countway Library of Medicine).

A founding father of sex research in the United States, a prominent physician who used his position to advocate for access to birth control, and a distinguished clinician: Robert Latou Dickinson, with his deep interest in women’s health, took on all of these roles. In this presentation, Rodriguez will discuss these three roles – sex researcher, birth control advocate, and clinician – of this historically understudied physician, focusing on his pioneering research regarding female sexuality.

Robert Latou Dickinson’s relationship with the New York Academy of Medicine was a critical part of both his professional and creative identity. In 1891, Dickinson became a Fellow of the organization and served on numerous committees, including as Chairman of the Academy’s art committee from 1935-1940.  At the Academy Dickinson was given a dedicated studio space, where he worked on the Birth Series and other three-dimensional anatomical models. While de facto artist-in-residence, Dickinson also engaged Alfred Kinsey to lobby the Academy to open a sex education library. This talk will explore Dickinson’s role as influencer and occasional disrupter within the Academy, as he advocated for sex education and for greater access to medical information for public audiences.

Rosemarie Holz, Ph.D., Associate Professor of Practice, Associate Director, Women’s and Gender Studies, University of Nebraska-Lincoln, "So that which has been lost is now found!" Exploring the magic of the 1939 Dickinson-Belskie Birth Series Sculptures.”

In this presentation Holz will discuss the creation and dissemination of the hugely influential yet surprisingly overlooked 1939 Dickinson-Belskie Birth Series sculptures, which illustrate the process of human development from fertilization through delivery. First displayed at the 1939-1940 World’s Fair in New York City, they were reproduced in a variety of forms and sent out across the United States and overseas, giving rise to modern views of pregnancy decades before Lennart Nilsson’s much-heralded in utero photographs in Life magazine in the 1960s. Despite their enormous popularity, by the 1970s and ‘80s the Birth Series began to disappear from public knowledge, eclipsed by new technologies, such as ultrasound, that offered modern ways to view in utero development. Holz will conclude her presentation by describing the Birth Series’ surprising re-birth since their 2014 recovery from the dusty storage collection of the University of Nebraska State Museum, a re-birth that is prompting renewed fascination with these evocative forms and new conversations.

Anna Creadick, Ph.D., Professor of English and American Studies, Hobart and William Smith Colleges, Model bodies, normal curves: Norm and Norma in Postwar America.
In the early 1940s, with their Birth Series models completed, sexologist Robert L. Dickinson and his sculptor-collaborator Abram Belskie created two anthropometric sculptures representing the "average" American male and female bodies. Dickinson named them "Normman and Norma." Dickinson's effort to model the "normal" body was indicative of a broader obsession taking hold in midcentury America, as doctors, psychiatrists, physical anthropologists, and scientists began to isolate the normal as a subject, to try and define normality with increasing precision.  In 1945, Dickinson donated the "Norm and Norma" statues along with his Birth Series and other medical models to the Cleveland Health Museum, where they might have just gathered dust. But instead, Norm and Norma began a decade-long tour of the postwar public sphere, appearing in newspaper articles, popular science magazines, television shows, and even a look-alike contest. This presentation tells the story of the wartime production and postwar reception of these models, whose "normal" curves helped to promote a powerful organizing category of postwar culture